Widely acknowledged as Nasik, Nashik is an important city of the Maharashtra state of India. It serves as the administrative headquarters of the Nasik district as well as Nasik Division. The city is located in the northwest part of the state and positioned at an elevation of around 565 meters above the sea level. Nashik is situated 200 km away from the cities of Mumbai and Pune. It has been a center of attraction due to its gorgeous surroundings and pleasant weather. The city has created a niche for itself owing to its mythological, historical, social and cultural importance. Nashik has been energetic on cultural, industrial, political, and social fronts and has affected the existence of several eminent personalities.

Situated on the holy banks of the Godavari River, Nasik has witnessed a great number of mythological events. It is assumed that Lord Rama lived in Panchvati area of Nashik while exile along with his wife Sita and brother Lakshmana. Another mythological story suggests that Agastya Rishi meditated for one year to please the Lord near this area. Well, there are many other stories that the city has to tell to its visitors. The very favorable climate of Nashik city allows the people growing grapes in huge quantity along with making of wines. This is the reason; Maharashtra government has made this city the hub of wine industry in India. So, Nashik has become popular as the 'Wine Capital of India' as well as 'Grape City of India'. The city of Nashik appeals the tourists with a number of tourist attractions and comprises of the numerous ghats and temples located within its periphery. Its charming surroundings and pleasurable weather make your trip to Nashik a memorable experience.

Nashik city is one of the most affluent cities of Maharashtra and counted amongst the chief pilgrim destinations in the state. It it is located on the banks of the holy Godavari River and houses a number of admired temples and ghats. Along with devotees, tourists in large numbers come to the city for enjoying sightseeing tours. To enhance the attraction of Nasik city, Kumbh Mela is also held here once in twelve years. Read the below information to get idea about the major tourist places to be visited on the tour of the Nashik city.

Coin Museum is one of the topmost sightseeing places in the Nashik. The museum was established in the year 1980 under the Indian Institute of Research in Numismatic Studies. The most amazing thing about this museum is that it is the only one of this type of museum in the whole of Asia. The museum creates a cool environment due to its scenic backdrop of the Ajneri Hill. The items kept on display in this museum are comprised of items like coins, moulds, colors, replicas, snaps, and brief write-ups.

Kalaram Mandir is one of the key tourist attractions in Nashik, which is located in the Panchavati area of the city. The temple was built Sardar Odhekar of Peshwa in the year 1790 and is the biggest and the simplest amongst other temples located here. The main deity of this temple is Lord Rama, whose idol has been placed inside in the form of an adorned black stone idol. The black color of the lord’s image makes it the Kalaram Mandir.

Pandu Lena caves are basically among those numerous Buddhist Caves that were built during the prosperous days of the religion and are 24 in number. These caves are located close the Nashik city at a distance of about 8 km towards its south. These caves were constructed as the home of the Jain saints by the Jain kings. Cave 3 is a huge vihar and decorated with a few superb sculptures. Cave 10 also features several elaborately carved sculptures.

Ramkund was built by Chitrarao Khatarkar in the year 1696. It is a sacred tank in Nashik. As per the legend, Lord Rama used to take bath in this holy tank when he was sent to exile of 14 years. The tank is considered so blessed that a lot of people immerse the ashes of their deceased relatives at this place only. Ashes of several eminent personalities, like Pandit Jawaharlal Nehru, Indira Gandhi and Y B Chavan, have been also immersed here.

Muktidham Temple is one of the most revered religious attractions in Nashik, which is situated 7 km away from the heart of the city. The temple is entirely built using the shining white marble of Makrana. It is exceptionally renowned for its wonderful and unique architecture. 18 chapters of the Bhagwad Geeta have been inscribed on the white walls of the temple. It is believed that merely visiting this temple give you all the gains of visiting the four dhams or other holy centers.

Someshwar is positioned on the banks of holy Godavari River in the outskirts of the Nashik city. The place features temples dedicated to Lord Shiva and Lord Hanuman and is enclosed with lush green surroundings. There is Navasha Ganapati Temple, which is also very popular. The weather of Someshwar is very pleasant and has been used as a shooting location for many movies.

Deolali Camp is one of the oldest military centers in India dating back to the year 1861. The main purpose behind the establishment of this camp was to offer a place to the mentally strained and exhausted soldiers for relaxing. Khandobachi Tekadi Temple is one of its greatest attractions and being visited by a large number of devotees.

Artillery Center of Nashik is located behind the Pandav Caves and is admired as the biggest Artillery Center of Asia. Previously, it was located in Pakistan. However, it was shifted to the city post partition in 1947. At this center, training is provided to officers and soldiers of the Indian Army.

Panchavati is a garden of five banyan trees. This is the place where Rama made his home along with his wife Sita and brother Lakshman on their exile in the wilderness.

Located on a hill range that consists of seven hills, Saptashrungi is an important religious site of Hindus. While driving to this temple, one can come across reasonably picturesque views. During the monsoon season, the views are more alluring.

Located 15 km away from the city center, Sula Vineyards is a professionally managed estate offering wine tasting sessions with great tips. The tour to this vineyard is highly recommended.

Sundarnarayan Temple is located on the corner of Ahillyabai Holkar Bridge. This holy place was constructed by Chandrachud in year 1756. The temple is dedicated to Lord Vishnu and houses his idol in its sanctum sanctorum. It is built in such a way that the very first rays of the sun fall on the idol of Lord Vishnu.

It is one of the most revered holy sites in India and among the 12 Jyotirlingas. Located 30 km away from Nashik, the sacred place enshrines a Shiva Linga in the sanctum sanctorum. After a visit to this temple, devotees attain salvation. The holy River of Godavari originates from here.

March to Mid-June, warm and humid 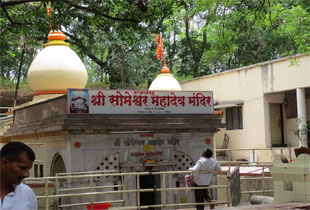 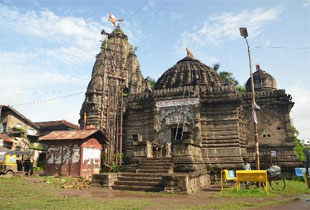 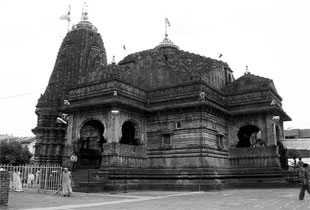