Puri is a beautiful city and a municipality of the state of Odisha. It is headquarter of the Puri district. Sited on the Bay of Bengal about 60 km south of Bhubaneswar, Puri is being known from different names since long. It is also famous as Jagannath Puri due to 12th-century Jagannath Temple is situated in the city. The city is one of the key pilgrimage sites of Char Dham – the eminent pilgrimage of Hindus in India. Puri is also known as the dwelling of Lord Jagannath and is among the most visited tourist destinations of India. It is located on the eastern side of Orissa. The main attractions of the city boast of various stunning temples and dazzling beaches. Other popular names, from which the city is famous as, are 'Jagannath Puri', 'Martya Vaikuntha' and 'Sri Purusottama Dham'. The stunning city of Puri holds great spiritual importance for people and devotees coming here from different parts of India to offer the prayers.

In spite of the fact that the city features charming beaches, its religious factor draws more number of tourists. However, if a single attraction of Puri tourism deserves the maximum praise, it is the Lord Jagannath Temple. The temple is dedicated to Lord Krishna. If you travel to Puri, the place will welcome you with several temples, maths and ashrams. Puri creates Golden Triangle of Eastern India along with two other cities Bhubaneswar and Konark. Apart from religious significance, enjoying the gorgeous views of the white sandy beaches of city is a top thing. Among all the beaches, Puri beach is the most visited ones and enjoys a splendid sight of the city and holds religious importance also. Puri is truly an energetic place in the coastal delta of the Mahanadi River, which is situated on the shores of the Bay of Bengal.

Puri is synonymous to Jagannath Temple, which is one of the most renowned temples of India. It is also the biggest temples of Orissa. This temple is located on the Nilgiri Hills and established in the 12th century. This temple is dedicated to Lord Jagannath (Lord Krishna). The credit of the foundation of Jagannath Temple of Puri goes to Raja Ananta Varman Chodaganga Dev. An annual Rath Yatra is organized in the Jagannatha Temple that attracts a huge number of devotees.

Gundicha temple is one of the most prominent temples in Puri, situated on the northeastern location of Jagannath Temple. The temple is named after Gundicha Devi –the queen of king Indradyumna. The temple is constructed in traditional kalingan style and positioned in the heart of the garden. The temple features two gates, including Western and Eastern gate. The devotees enter into the temple from the west gate and come out by the east gate.

Puri Beach is a popular place to hangout for the tourists coming to the city. It is famous for its fine white sands and the high waves breaking on the shores. This beach offers numerous water sports activities to the visitors. The waves of Puri Beach are not as high as Indian Ocean. So, visitors can also enjoy here bathing. There are many stalls around the beach selling souvenirs.

Located very close to Jagannath temple, Loknath Temple is dedicated to Lord Shiva. This temple was constructed during the 11th century. It features a Shivling that is believed to have been installed by Lord Ram. The temple is very holy and has the powers to reduce your pain and agony of life.

Sudarshan Craft Museum is located in the Station road. This museum was established by Shri Sudarshan Sahoo in year 1977. The museum features a number of artistic works here that are on display for the visitors. There is a Buddhist temple of Japanese style in its premises. Sudarshan Craft museum displays handicraft items, painting sculptures, wood, fiberglass and other artifacts.

Lakshmi Temple is one of the most popular Hindu temples situated in Puri. This temple is located close to Lord Jagannath Temple. Lakshmi Temple dedicated to Goddess Lakshmi, the shrine plays a very important role in the annual Rath Yathra. People believed that after the marriage of Lord Shiva and Goddess Parvati, Goddess Lakshmi invites them to this shrine. This temple can be easily reached either by local transport or by on foot.

Swargadwar Beach is one among the popular tourist attractions in Puri, which is located about 2 km away from the Jagannath Temple. Along with natural beauty, this place also holds great religious importance for people. It is used to be the bathing place of Sri Chaitanyadev - a famous spiritualist of the Vaishnava sect.

Situated on the north-western part of Gundicha Temple, Indradyumna Lake is one of the five holy tanks in Puri. It is known for its spiritual connects with Lord Krishna and allures every visitor with rare charm. This place is very much known for featuring a child Krishna temple and the shrine of King Indradyumna.

March to Mid-June, Pleasant and beautiful 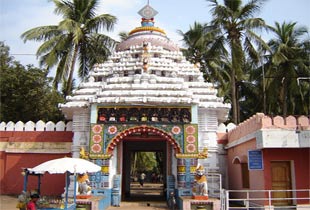 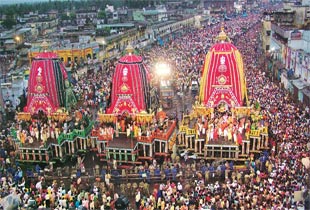