The city of Ajmer was built by Raja Ajay Pal Chauhan in the 7th century. It remained the main hub of the Chauhan dynasty till 12th century. After that, the city was governed by Mughal kings and then British rulers. This small city of Rajasthan conveys together some of the most diverse cultures of India. This heritage city is located on the slopes of the Aravalli mountain ranges.

It lies to the south west of Jaipur. Being a city indulged in history, Ajmer has been ruled by a number of dynasties. They have left the mark of their culture and tradition on various aspect of this city.Ajmer travel & tourism is mostly known for pilgrimage and one can a blend of Hindu and Islam culture in ethnicity of this place. Both Hindus and Muslims proceed to this city with great admiration.

The town is stuffed with people of different religious beliefs. They come here to pray at the Dargah of the Sufi saint Khwaja Moinuddin Chishti and get peace in doing so. Get complete information about this city through Ajmer travel guide

Ajmer is a wonderful city where you can enjoy a rich culture and tradition. Unlike other cities of Rajasthan, it is mainly known for its religious significance. There are many sightseeing places in Ajmer that can be visited on your Ajmer tour.

Your trip to Ajmer is incomplete without paying a visit to the tomb of Sufi saint Khwaja Muin-ud-din Chishti. It is the most renowned tourist attraction of Ajmer, which is considered to be very sacred. The Khwaja came to Ajmer in 1192 from Persia and died here in 1236. He spent his entire life towards the betterment of the oppressed. The tomb gained popularity during Mughal period as many emperors contributed to the buildings. Construction of the shrine was completed by Humayun and its gate was made by the Nizam of Hyderabad. Akbar the Great used to visit this Dargah every year.

The Nasiyan temple is another popular place to visit in Ajmer. It is also called as Red Temple and is a temple of the Digambar Jains. The double story hall of the temple exhibits a number of gold plated wooden figures. These figures portray Jain mythology legends. The hall of the temple is decorated with glass mosaic, expensive stones, gold and silver work.

This is an artificial lake, which is named after Anaji Chauhan (grandfather of Prithvi Raj Chauhan). Located on north side of Ajmer, the scenic lake provides serenity and scenic views to the visitors. There is a marble pavilion, which has surrounded the lake is. Emperor Jehangir established the Daulat Bagh Gardens next to the lake.

Taragarh Fort in Ajmer is one of the popular forts of Rajasthan. It was built in 1345 and has six gates. The fort also features huge reservoirs of solid rock along with one of the largest battlefields, Bhim Burj.

It is an old mosque, which is supposed to be built in two and a-half days (Adhai-Din). This is the reason, it has got this name. The front screen wall of the mosque comprised of seven pointed arches. The mosque has a stupendous tower inside it that is used by people to chant prayers.

Pristine and clean, the temple is a beautiful place to visit in Ajmer. It features a modern architecture and its walls display manuscripts of Jain religion written beautifully. Its lavish gardens enhance its beauty and the large prayer hall displays a single sculpture that will touch you deeply.

Built by Mughal Emperor Akbar, the mosque is located inside Ajmer Sharif Dargah. It is constructed using the famous Rajasthani marbles of green and white color. The place is charmingly built and is very peaceful. One can sit there for hours and spend some peaceful moments of life.

Built in 1570 by the Emperor Akbar, this is a beautiful and well-maintained palace that has turned into a museum. It is a prime tourist attraction in Ajmer. The museum of the palace displays a large collection of sculptures, artifacts and arms.

Mayo College is an independent boarding school spread over an area of 300 acres. The museum displays an excellent collection of coins, statues and other artifacts. Most of these objects are donated by old students of the school.

Located on the banks of Ana Sagar Lake, this is a well-known garden of Ajmer. This is a well-maintained garden featuring numerous flowers and trees with sprawling lawns. The marble pavilions of garden are built by Emperor Shah Jahan, which enhance the attraction of the place.

Mid-March to June, Warm and scorching 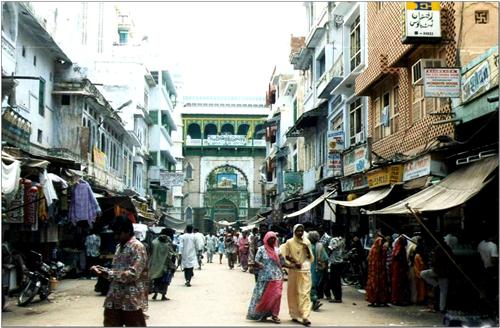