Port Blair is one of the small old-world yet charming cities of India, which offers calm and pleasant ambiance to the visitors. Its natives speak different languages, including Tamil, Hindi, Bengali and Telugu. The city is the headquarters of the South Andaman district of India and also a well-known local administrative sub-division (tehsil). One of the largest towns of Andaman Islands, Port Blair is a municipal council of the Andaman district. It is an amazing tourist destination, which is known for its exceptional natural beauty.

Port Blair is the capital city of the Andaman and Nicobar Islands, which is situated on the east coastal area of South Andaman Island. It houses a number of museums and is the key naval base INS Jarawa of the Indian Navy, with sea and air bases of the Indian Coast Guard and the Indian Air Force. Port Blair is supposed to be mini India as people from different states, communities and cultural believes live here.

The city has been a spectator the Indian freedom struggle. Its popular Cellular Jail is the place where punishment of Kala Pani used to be given. The place attracts people with several tourist attractions, including Marina Park Complex, Sound and Light Show, Ross Island, Carbyns Cove Beach, Samudrika Museum, Cellular Jail which appeal the tourists from all across the world at this breathtaking place.

Port Blair is a gorgeous city, which has countless places of interest for tourists. Few of the famous places to visit in Port Blair are:

Cellular Jail is the prison of British era, which was constructed to keep the prisoners away from the mainland. Here, the prisoners used to be kept in the isolated cells and were given harsh punishments, regular thrashings and sometimes death. The overall architecture of the place awes people and sometimes disturbs them as well due to the small-sized jails. The light and sound show is organized every evening, which is the key attraction of the city. The jail remains closed on Monday and other national holidays.

It is one of the oldest saw mills in Asia, which is still working and provides a fascinating insight into the the historical era and economy of the island. Chatam jetty is the place where the ships from cities like Kolkata and Chennai are loaded with various products to enter into Port Blair.

The museum was established in the year 1975-76. It is an ethnographic museum that exemplifies the tribal life of Andaman Island. This museum remains closed on Thursday and government holidays. The museum opens from 8.30 AM to 1.00 PM and 1.30 PM to 4.30 PM.

Samudrika Naval Marine Museum is run by the Indian navy and famous for creating awareness about the atmosphere in the ocean and the marine life of the Islands. There are five sections in the museum displaying different aspects of the island, including history, ecological features, archaeology, marine life and citizens of Andaman. Situated opposite to Andaman Teal House, the museum displays a number of corals, shells and several species of vibrant fishes.

Located close to Rajiv Gandhi Water Sports Complex in Port Blair, Fisheries Museum displays various species of marine life. These marine livings are widespread to the islands and are generally found in the Indo-Pacific and the Bay of Bengal. It has more than 350 different species of marine life. The museum also displays live animals like huge corals, starfish and sharks. Other interesting things to be seen here are the skeleton of a sperm whale and huge saw fish and dolphin.

Located close to Andaman Teal House, the museum displays variety of corals, sponges, butterflies and centipedes. In addition, it also houses other mammals, birds and reptiles. In other words, the museum is a treasure trove of diverse flora and fauna found in Andaman. Along with being a tourist spot, these collections of the Zoological Survey of India museum are very useful for scientists, research students and animal enthusiasts.

Science Center is situated 5 km far from Port Blair town at Goodwill Estate. It is a pleasant location to spend some good time with family and friends. This museum was established in 2003 and displays the genesis of the islands, science of seas, fun science gallery, small planetarium, open air Science Park and an internal butterfly corner. This huge museum cultivates an atmosphere of fun-filled learning with a playground featuring pioneering slides and swings in its premises. One can see the ruins of the first ever aircraft that has entered the island in Science Center. There are much more to see at this museum.

This is a historical bunker in proximity to Corbyn’s Cove and offers a peek into the fascinating past of the island. The bunker was built during the Japanese occupation of Andaman Islands in 1942 during World War II. It offers interesting frames for photography.

Located 7 km away from Port Blair, it is an ideal spot for enjoying sunbathe and water sports. Corbyn’s Cove is dotted with coconut and palm trees and perfect place for lying around the sun on hammocks and indulging into several water sports of the azure waters.

Located at 1,200 feet, it is the highest point in South Andaman 15 km away from Port Blair. At Mount Harriet, one can enjoy the amazing views of the Havelock and Ross Islands. Don’t forget to click a panorama shot from this point.

Baratang Island allows the travelers experiencing the thrill of walking across low-lying bamboo bridges over swamps. Take a boat to the limestone caves and have fun there.

March to Mid-June, warm and pleasant

December to February, Cool and enjoyable 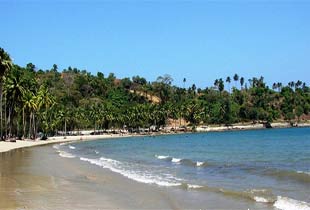 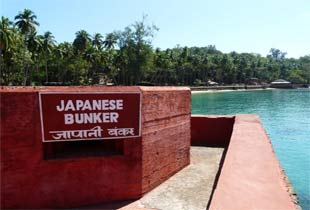 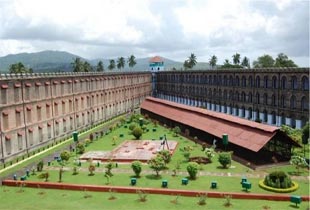