Vrindavan is just a small town in the Mathura district in Uttar Pradesh. It is said that lord Krishna spent has beautiful memories of childhood in this town and he spent his childhood days in Vrindavan. This town is not so far from Mathura, its just 10 km away from Mathura. This town is considered to be sacred by Vaishnavism and it has many temples dedicated to goddess Radha and Lord Krishna. Vrindavan is famous because this place evokes lovable characteristics and playfulness of lord Krishna. If we talk about Vrindavan's history the mention of Krishna is inevitable. At this place Krishna passed a lot of time in teasing the gopis and cow herding girls. This place has ancient past related to Hindu history and is reputed as an important Hindu pilgrimage site.

Vrindavan is an ancient town which has utmost importance in Hinduism. Vrindavan is a holy town. It is famous place of pilgrimage and there are many famous temples which are the main attractions of Vrindavan. This place offers many good places to visit including the famous temples and ghats. Vrindavan has many points of interest for the tourists.

It is one of the most important temples dedicated to Govind Dev that is Lord Krishna who is reputed as the main deity. The idol of Krishna is bought to this temple by the Rajput Kind of Jaipur; Maharaja Sawai Jai Singh II.

This temple was completed in 1851 and built in a distinctive Dravidian style. This temple is dedicated to Lord Ranganath or lord Vishnu. This temple is famous for its architectural aesthetics and amazing temple complex.

This temple is built b Swami Haridas and it is one of the famous temples in Vrindavan. Swami Haridas was the guru of famous Tansen. This temple was built in 1862 because he wanted to house an old idol of lord Krishna and wanted to save the idol from getting into the hands of Mughals. Timings to visit Bankey Bihari temple in summers are 7.45 AM - 12 PM, 5.30 PM - 9.30 PM and in winters 8.45 AM – 1PM, 4.30 PM - 8.30 PM. It is open all days in a week. It is the best tourist attraction which should not be missed in Vrindavan tour.

This temple is built by the famous jeweler of Lucknow and thus the temple was named Shahji temple. It is famous for its neo Dravidian architecture and craving on the stone. The main attraction is the Darbar Kamra which is a hall and it is decorated with wall paintings and a grand Chandeliers.

This is an oldest temple which is established by Madhav Gaudiya Sampradaya. It is one of the famous temple is Vrindavan.

It is situated very close to Banke Bihari temple and is a perfect place to visit not only for the spiritually inclined people but for the common travelers too. This temple is the most coveted religious place in Vrindavan. This temple is a must visit.

This temple was built by Kapur Ram Das of Multan in 1580. It is one of the ancient temples in Vrindavan and is constructed near Kali Ghat at a height of 60 feet.

This temple is dedicated to late Pagal Baba and their followers built this temple in his remembrance. This temple is famous for its white exteriors and for its puppet exhibition in the ground floor. The puppet plays basically act scenes from the famous Hindu epic of India; Mahabharata and Ramayana.

It is the most opulent temples located in the heart of the city. It was built up by Maharaja of Jaipur Sawai Madhav.

This is one of the important Ghats in Vrindavan and it is located on the banks of River Yamuna. It is considered a revered pilgrim spot because at this place lord Krishna took a bath after he slew the demon Keshi.

It is a beautiful place visited by many devotees and nature lover. There is even a small temple inside this garden and it is said that Krishna performed Raslila with Radha in this garden. It is a religious and mysterious place.

Place to Visit around Vrindavan is Mathura

It is just 10km away from Vrindavan and it is a famous city of Uttar Pradesh. It is the nearest place to explore around Vrindavan. It is the birthplace of Lord Krishna and is considered as one of the seven holiest cities according to Hinduism. There are many sightseeing places in Mathura like Dwarakadheesh Temple, Mathura Museum, Jama Masjid, Potara Kund, Mathura Jain Temple, Vishram Ghat and Krishna Janam Bhoomi Mandir. Apart from these places there are other tourist attractions also in Mathura.

Mid-March to May, Hot and Humid

October to February, Cool and Pleasant 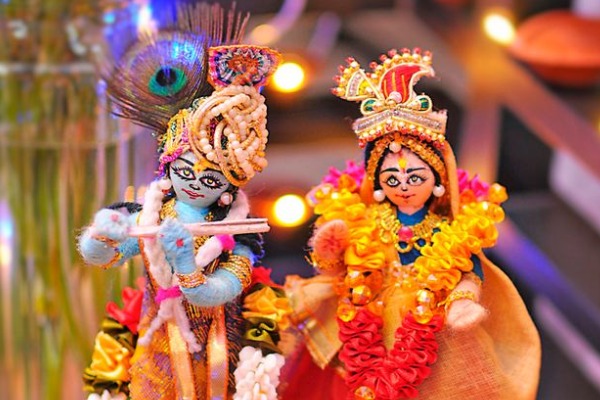